Michele Foods is a condiments business founded in 1984 by Michele Hoskins in Chicago, Illinois.

America Washington, a former slave, came up with a syrup recipe. So good and delicious was this syrup that it got passed down generations of her family eventually getting to the Hoskins family. In the early 1980s, Washington’s secret recipe was taught to her great, great, great granddaughter, Michele Hoskins by her mother. The pancake syrup became a hit in the neighborhood.

Unfortunately, the descendant Hoskins, divorced from her husband and subsequently, ran into some financial difficulties. Armed with a recipe she knew could make her some money to support herself and 3 daughters, she decided to turn it into a commercial product that could be brought to the market.

Hoskins then sold all her possessions and relocated with her daughters back to her mother’s attic. In the basement, she got to work making syrups in a 55 gallon drum (approximately 208 litres) and hand filling the products into bottles. She delivered these bottles to local groceries in her neighborhood. Finally, Michele Foods was born.

In 1984, Hoskins secured the top two largest retail chains in the Chicagoland area. With this milestone, her business took off from her mother’s basement and into 400 retail chains. In addition, she soon became the first minority supplier for Wal-Mart and Denny’s. Over the years, she has also proceeded to partner with some of the most respected food companies in the world such as General Mills and Sara Lee.

Currently, Michele Foods products can be found in top retail chains across the United States in more than 8,000 stores. Her wonder product that first sparked this growth was Michele’s Honey Crème Syrup. This is a rich, creamy confection consisting of honey, cream and butter. The condiments brand has since expanded to include Michele’s Butter Pecan and Maple Crème syrups.

Recently, Michele Foods has seen a spike in sales after Quaker Oats removed the Aunt Jemima brand following outrage at its imaging thought to promote racial stereotypes. As a result, Hoskins hopes to expand her company even further to cater for her suddenly, growing market. 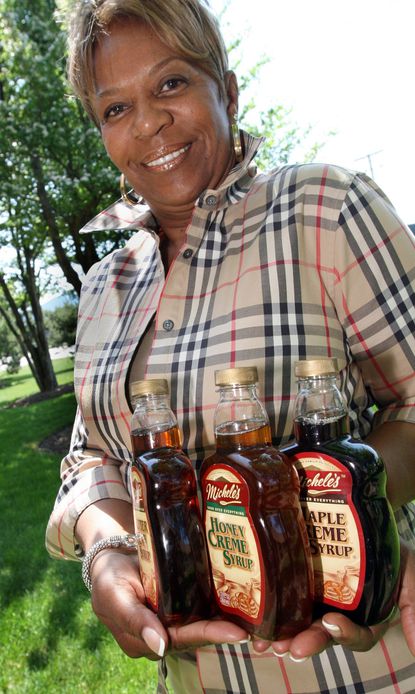 In 2019, Hoskins was diagnosed with breast cancer. She went on to beat the disease and now considers herself a breast cancer survivor. As a result, Hoskins collaborates with either the American Cancer Society, Susan G. Komen for the Cure or Sisters Network Inc in a fundraising campaign.

Pink caps and neck hangers are placed on syrup bottles in select stores during the month of October. Proceeds from the sales benefit one of these charitable organisations and women battling breast cancer.

The Michele Hoskin’s Program is a course offered by Michele Foods and is designed to educate on how recipe ingredients can be transferred to formulations. Signees further learn on Entrepreneurship Skills, Professional Marketing Tips and Sales Techniques. The seminars target new entrepreneurs just launching businesses and entrepreneurs struggling to make profitable sales.