Ebony Iman Dallas is an award winning Somali-American artist, designer and founder of Afrikanation Artists Organization based in Oklahoma City. After graduating from the University of Central Oklahoma with a BA in Advertising and Art degree, Dallas was hired by Carol H. Williams.  At the Advertizing firm based in Oakland, Carlifornia, she worked as an Art Director.

She eventually earned her MFA Design degree from the Carlifornia College of the Arts in San Francisco. Worth noting is her thesis, “Painted Bridges”. The thesis looked at ways to unify various populations within the African diaspora through  Art and Design. This subsequently birthed the Afrikanation Artists Organization, as an NGO in Hargeisa, Somaliland and a 501(c) (3) organization in the US.

From April 6th- 29th 2018, Dallas exhibited her Art Project, ” Through Abahay’s Eyes” (Through my father’s eyes). This took place at the Paseo Plunge in Oklahoma City. The exhibit included a series of paintings tracing her roots and heritage of her biological dad, Said Osman.

Said Osman was a Somali immigrant to the US from Hargeisa, Somaliland. Unfortunately, Dallas never met him because he died while her mother was 3 months pregnant with her. His mysterious death in college is troubling to the family to date. Dallas’ mum remarried when she was a toddler and from her step-father who adopted her, she got her last name.

Understandably, given the difficulty in tracing one’s roots, the Art Project took over 15 years to complete. However, it ended up being a fulfilling journey for Dallas who got to travel to Africa for the first time in 2004. In addition, by chance meeting in the US, she was also able to get in touch with family from her father’s side. The result were several paintings that told a story of a Somali immigrant, who was lucky enough to father a highly gifted daughter. 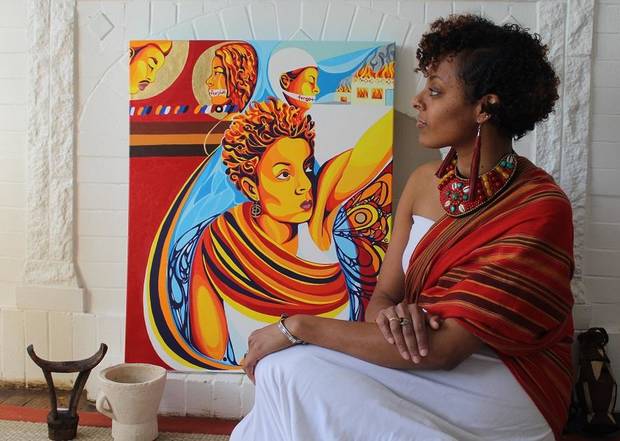 Dallas in traditional Somali inspired wear sits next to one of her paintings for the “Through Abahay’s Eyes” Art Project. Image Courtesy of Somtribune.

Previously, Dallas’ artwork has been featured on Food Network’s Restaurant Impossible and in the Romare Bearden Centennial Celebration in New York City. She is a proud graduate of the 2013 Leadership Art Class. In addition, she has also worked as a Creative Designer for the Oklahoma Media Company and has been a professor in the African and African-American studies program at the University of Oklahoma.

The Hoperaisers Initiatives: Transforming Young Lives In Korogocho And Its Environs