Naomi Osaka was born in Japan to a Haitian father and Japanese mother. From the age of 3, she has lived and trained in the United States later choosing to represent Japan. Osaka rose into prominence at age 16 when she beat US champion, Samantha Stosur at the 2014 Stanford Classic. Worth noting is that this was her first Women’s Tennis Association (WTA) Tour debut.

In 2018, she beat 23 Grand Slam Singles champion, Serena Williams, in the final of the US Open. As a result of this feat, she became the first Japanese player to win a Grand Slam Singles title. In January 2019, Naomi Osaka was ranked at no. 1 by the WTA. As of September 14th 2020, she ranks at no. 3.

Forbes reported this year that Osaka was the highest earning female athlete of all time by annual income. Furthermore, she ranked at no. 29 per earnings among all athletes. Currently, Osaka trains in Los Angeles with Belgian Coach, Wim Fisette.

Activism, Black Lives Matter and her Social Justice statement at the US Open 2020 Tournament

Osaka joined the Black Lives Matter protests over the Summer of 2020 with her boyfriend, rapper Cordae. This included attending protests in Minnesota after George Floyd’s death. On July 1st 2020, Osaka penned an op-ed for Esquire Magazine. In it, she described herself as Asian, Black and female and talked of why she had decided to take a stand against social injustices towards black people in the US.

Osaka declined to play her semi-final match in the Western and Southern Open week preceding the US Open 2020. This was a move by the tennis star aimed at standing in solidarity with other athletes in professional basketball, baseball and soccer who were equally protesting systemic racism and police brutality. Tour officials subsequently cancelled the entire day of play.

At the 2020 US Open, the 22 year old chose to wear masks to the court for all her 7 matches. The masks were particularly special because each bore the name of a black person who was a victim of brutality. She won all 7 matches. And on Saturday for the final, Osaka wore a mask with the name, Tamir Rice, a 12 year old boy shot and killed in Cleveland by a white police officer in 2014. She proceeded to smash her way to victory. 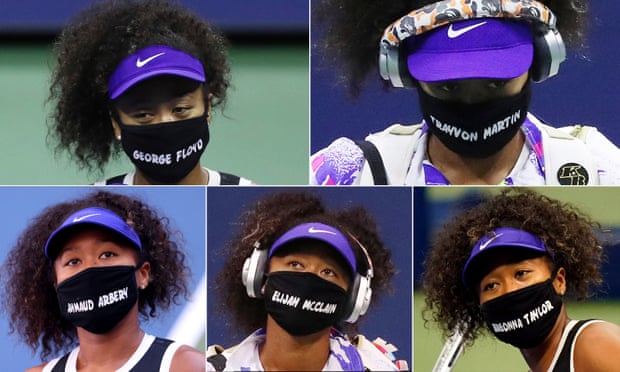 Naomi Osaka at the US Open 2020 wearing masks bearing the names of Black people who were victims of race fueled brutality. Composite courtesy of Getty; AP

See more on Music and Sports