On October 8th, news outlets across the world reported that a painting of Queen Victoria’s African goddaughter, Sarah Forbes Bonetta, had gone on display at the Isle of Wight’s Osborne House. The painting is by Zambian-British artist, Hannah Uzor. 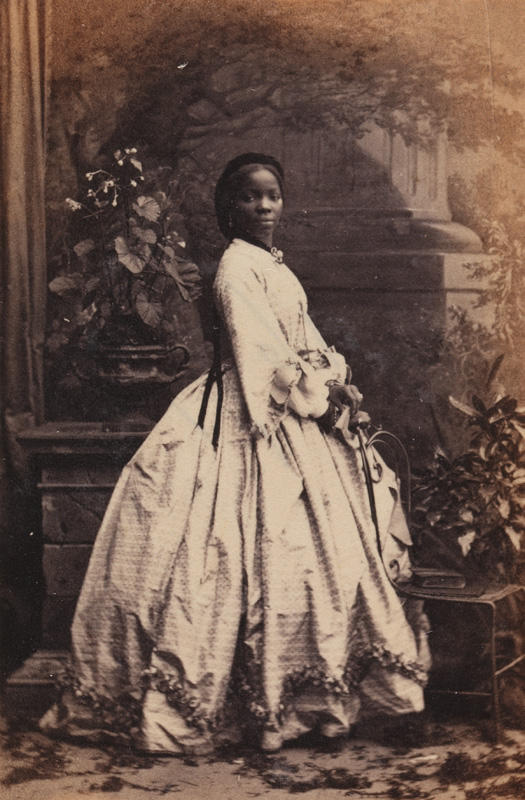 The original photo of Sarah Forbes Bonetta in her wedding gown which artist, Hannah Uzor reproduced in a painting. Image courtesy of National Portrait Gallery, London.

Sarah Forbes Bonetta, initially named Aina, and of Yoruba descent, was the daughter of a West African ruler who was orphaned during a raid and subsequently, sold into slavery at the age of 5. In efforts to abolish slavery, Captain Frederick Forbes, on behalf of Queen Victoria, happened to visit the King of Dahomey (present day Republic of Benin) to negotiate the suppression of slavery. The mission was unsuccessful but the King instead presented him with a 7 year old orphaned girl as a “diplomatic gift.”

That was in 1850 and Forbes brought the little girl with him to England and presented her to the Queen at Windsor Castle. He named her Sarah Forbes Bonetta in part after his ship the HMS Bonetta. Queen Victoria was in turn quick to notice Sarah’s intelligence and offered to pay for her education thus transforming into her godmother.

In 1862, Sarah married a Sierra Leone born merchant, James Davies, who was the son of liberated slaves and based in Brighton. She and her husband proceeded to name their first daughter after the Queen who again became the child’s godmother. Sarah passed on in Madeira after contracting tuberculosis. Her daughter received the news while on a visit to the Queen at Osborne.

Hannah Uzor’s painting is thus based on a photograph of Sarah wearing her wedding dress. The original photo is on display at the royal seaside palace, where the Queen is known to have once lived with Prince Albert and their 9 children. 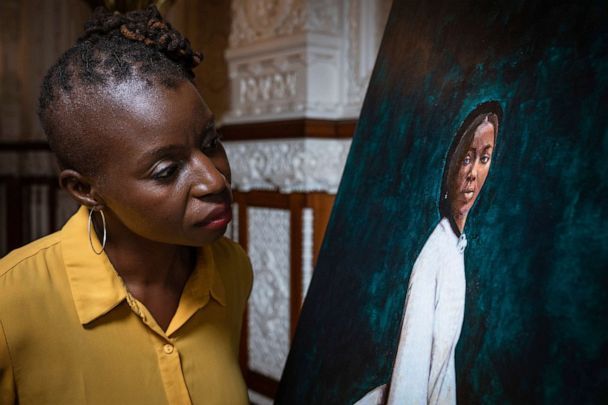 Hannah Uzor with her painting. Image courtesy of Christopher Ison for English Heritage.

English Heritage has already stated that it plans to feature portraits of “overlooked” black figures connected with its sites during the Black History Month in the UK this October and beyond. From Spring 2021 it will display further portraits which tell the stories of black people such as Sarah Forbes Bonetta in English history.

Worth noting is that at the beginning of the year, Sarah’s story was subject of a play, The Gift. Other portraits scheduled for display include the one of Rome’s African born Emperor, Septimius Severus and that of James Chappell, a 17th century servant credited with saving his master’s life.

Hannah Uzor speaking on her painting going on display said;

“Through my Art, I’m interested in exploring those forgotten black people in British history, people such as Sarah. What I find interesting about Sarah is that she challenges our assumptions about the status of black women in Victorian Britain.’

‘I was also drawn to her because of the parallels with my own family and my children, who share Sarah’s Nigerian heritage. To see Sarah return to Osborne, her godmother’s home, is very satisfying and I hope my portrait will mean more people discover her story.”

The painting is set to return to the house in Isle of Wight permanently from Spring 2021 as part of a wider series of portraits.

Start booking your tours in time for 2021 with Go See Tour, a US based travel agency offering cruises and land vacations to a variety of destinations worldwide.